Here are three cards I've made recently. The first is a Get Well for Lyd (which hopefully she has by now). 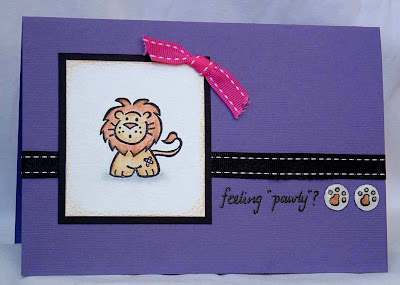 The second a variation on the same theme, made DL size for a challenge on copycatcards.

The third is a birthday card for Steph. I love the effect of the glittery embossing powder. It's made with my stamps from My Favourite Things called Boho Blossoms. It is a set of about 20 stamps including words. Really nice. 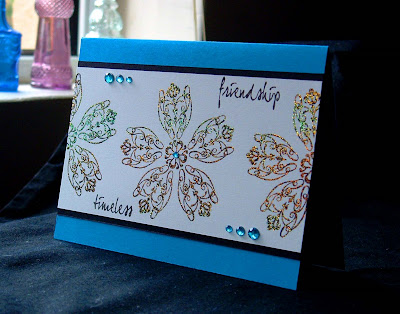 The second card, and the teabag fold card in the previous post, won me a book in a challenge on copycatcards. Yay!

It's so hard to get a nice photo of cards. I try to catch the light from the windows but it doesn't help when it's dark and overcast, like Sydney seems to be so much lately, so the flash always wants to go off. Plus there's not a lot of room to move near my windows to set up a pretty background.
Posted by Hope at 08:49

Hope
I love craft - making things gives me such a feeling of satisfaction, and I tend to get a bit grouchy if I don't get my craft fix! Quilts are my greatest love, designing them, making them, snuggling under them, and now, writing patterns and seeing my quilt designs made by others.

Find me on Etsy